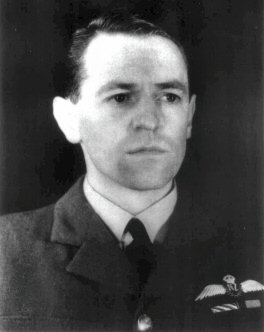 Squadron Leader Trent was born at Nelson, New Zealand, on 14 April 1915, and was 28 years old when the action for which he was awarded The Victoria Cross took place.

On 3 May 1943 the squadron was ordered on a 'Ramrod' bombing attack on a target in Amsterdam, (the code Ramrod, meaning the mission was so important it was to be continued with regardless of losses). Two squadrons were to escort the Venturas, a low level Supermarine Spitfire Mk5 group and a high level escort of Spitfire Mk9s ,which were to cross the coast at sea level so as not to alert German Radar, then climb. Unfortunately the Mk9s arrived early, and had also crossed the coast high, being anxious to gain a height advantage. They then ran low on fuel before the Venturas arrived and had to leave. A conference of leading German fighter pilots was taking place at an airfield virtually en route. These pilots scrambled when the Mk9s were detected. Under constant attack, 487 Squadron continued on to its target, the few surviving aircraft completing bombing runs before being shot down. Squadron Leader Trent, whose leadership was instrumental in ensuring the bombing run was completed, was awarded The Victoria Cross.

The citation from the London Gazette dated 26 February 1946 reads:

"On the 3rd May, 1943, Squadron Leader Trent was detailed to lead a formation of Ventura aircraft in a daylight attack on the power station at Amsterdam. This operation was intended to encourage the Dutch workmen in their resistance to enemy pressure. The target was known to be heavily defended. The importance of bombing it, regardless of enemy fighters or anti-aircraft fire, was strongly impressed on the aircrews taking part in the operation. Before taking off, Squadron Leader Trent told the deputy leader that he was going over the target, whatever happened.

All went well until the 11 Venturas and their fighter escort were nearing the Dutch coast. Then one bomber was hit and had to turn back. Suddenly large numbers of enemy fighters appeared. Our escorting fighters were hotly engaged and lost touch with the bombing force. The Venturas closed up for mutual protection and commenced their run up to the target. Unfortunately, the fighters detailed to support them over the target had reached the area too early and had been recalled.

Soon the bombers were attacked. They were at the mercy of 15 to 20 Messerschmitts which dived on them incessantly. Within four minutes six Venturas were destroyed. Squadron Leader Trent continued on his course with the 3 remaining aircraft.

In a short time 2 more Venturas went down in flames. Heedless of the murderous attacks and of the heavy anti-aircraft fire which was now encountered, Squadron Leader Trent completed an accurate bombing run and even shot down a Messerschmitt at point blank range. Dropping his bombs in the target area, he turned away. The aircraft following him was shot down on reaching the target. Immediately afterwards his own aircraft was hit, and went into a spin and broke up. Squadron Leader Trent and his navigator were thrown clear and became prisoners of war. The other two members of the crew perished.

On this, his 24th sortie, Squadron Leader Trent showed outstanding leadership. Such was the trust placed in this gallant officer that the other pilots followed him unwaveringly. His cool, unflinching courage and devotion to duty in the face of overwhelming odds rank with the finest examples of these virtues."

Taken Prisoner of War, Trent participated in the Great Escape, being the last man out of the tunnel before the escape was detected. Rejoining the Royal Air Force, he trained in jets, (having the dubious distinction of having to eject from a Vampire and a Meteor), and later commanded a Squadron of then new Vickers Valiants. He became a Group Captain, and Air Attaché to Washington, before returning to New Zealand with his wife and two daughters.

He died at Auckland, New Zealand on 19 May 1986, and was cremated at the North Shore Crematorium, Albany, New Zealand.

The medals awarded to Squadron Leader Trent are: