Reverse: Plain, except for the date of the action for which it was awarded.

Size: 35mm across the arms of the cross.

Ribbon: 38mm wide, the ribbon is plain crimson in colour, with a miniature of the Cross affixed to the centre when the ribbon only is worn.

Suspension: The suspender bar has laurel leaves on it. To the centre bottom of this bar is attached a small letter "V", with a ring passing through this and through a hole in a small semi circle attached to the top arm of the cross. The recipient's name is recorded on the back of the suspender bar.

Founded by Queen Victoria by Royal Warrant dated January 29, 1856, this is the highest British award that may be given for gallantry in the face of the enemy. It may only be awarded to members of the services and is open to both men and women, although no woman has as yet received it. Between 1856 and 2005 there have been 1354 Victoria Crosses awarded, of which three were bars.

The Crosses, which are cast by hand by Messrs. Hancocks of London, are still made from the metal of a cannon captured from the Russians at the siege of Sebastopol during the Crimean War.

It takes precedence over all other honours. It formerly carried with it an annuity of ten pounds to recipients who were not commissioned. The current annuity payable is 100 pounds, irrespective of rank.

The ribbon was originally blue for the naval awards and red for the army. In 1920 the crimson ribbon was adopted for all the services.

Under Clause 13 of the Warrant, where more than 50 men take part in an action, the officers, non-commissioned officers and other ranks may each choose amongst themselves a candidate for the award of the Cross.

Twenty one Crosses and one bar have been awarded to members of the New Zealand Armed Forces. 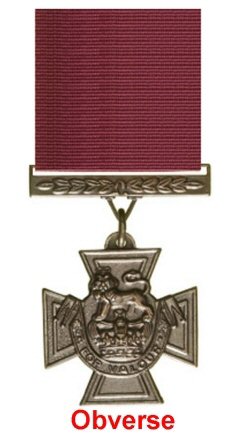