Obverse: A Cross flory terminated in the horizontal and base bars with bombs, the upper bar terminating with a rose, surmounted by another cross composed of aeroplane propellers charged in the centre with a roundel within a wreath of laurels a rose winged ensigned by an Imperial Crown thereon the letters R.A.F. and attached to the clasp and ribbon by two sprigs of laurel.

Reverse: The Royal Cypher above the date 1918. Since 1939, the year of award has usually been recorded on the reverse side of the lower arm.

Size: 55mm across the arms of the cross.

Ribbon: 31mm wide, the ribbon is of equal sized 3mm diagonal stripes of mauve and white.

Suspension: By an ornate suspender bar, through the bottom of which passes a ring, attaching the suspender bar to an eyelet attached to the upper arm of the cross.

Instituted in 1918 on the formation of the Royal Air Force, The Distinguished Flying Cross is awarded to officers and warrant officers for gallantry in action whilst engaged in flying operations against the enemy. Provision was made for the award of bars for subsequent acts.

Prior to the institution of the Royal Air Force, pilots in the Royal Flying Corps were awarded The Military Cross in similar circumstances. Subsequent Warrants extended the award to the Fleet Air Arm and those in other services who fly (e.g. Glider Regiment pilots).

The original ribbon of The Distinguished Flying Cross had the stripes running horizontally, but this was changed to the present ribbon in 1919. Only just over 1,000 Crosses were awarded during the First World War and they are therefore rare. During the Second World War, however, with the enormous expansion of the Air Force and the many actions, the number of Crosses and bars awarded was 20,946. 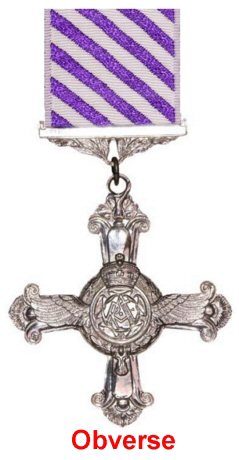