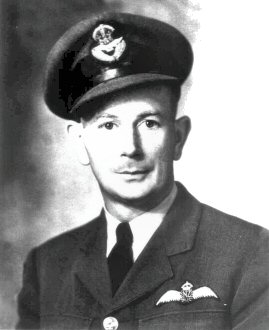 Flying Officer Trigg was born at Houhora, New Zealand, on 5 May 1914, and was 29 years old when the action for which he was awarded The Victoria Cross took place.

Trigg was an experienced Royal New Zealand Air Force pilot attached to the R.A.F. Coastal Command's 200 squadron. He was flying his first operational flight in a B-24 Liberator (having previously flown Hudsons), over the Atlantic from his base in Bathurst, West Africa (now The Gambia), on 11 August 1943 when he engaged a German U-boat, U-468, under the command of Klemens Schamong.

His aircraft received several catastrophic hits from the anti-aircraft guns during his bombing runs and was on fire as Trigg made his final attack. It then crashed, killing Trigg and his crew, so the only witnesses to his high courage were the U-boat crew members.

The citation from the London Gazette dated 29 October 1943 reads:

"Flying Officer Trigg had rendered outstanding service on convoy escort and anti-submarine duties. He had completed 46 operational sorties and had invariably displayed skill and courage of a very high order.

One day in August, 1943, Flying Officer Trigg undertook, as captain and pilot, a patrol in a Liberator although he had not previously made any operational sorties in that type of aircraft. After searching for eight hours, a surfaced U-boat was sighted.

Flying Officer Trigg immediately prepared to attack. During the approach, the aircraft received many hits from the submarine's anti-aircraft guns and burst into flames, which quickly enveloped the tail.

The moment was critical. Flying Officer Trigg could have broken off the engagement and made a forced landing in the sea. But if he continued the attack, the aircraft would present a "no-deflection" target to deadly accurate anti-aircraft fire, and every second spent in the air would increase the extent and intensity of the flames and diminish his chances of survival.

There could have been no hesitation or doubt in his mind. He maintained his course in spite of the already precarious condition of his aircraft and executed a masterly attack. Skimming over the U-boat at less than 50 feet, with anti-aircraft fire entering his opened bomb doors, Flying Officer Trigg dropped his bombs on and around the U-boat where they exploded with devastating effect. A short distance further on the Liberator dived into the sea with her gallant captain and crew.

The U-boat sank within 20 minutes and some of her crew were picked up later in a rubber dinghy that had broken loose from the Liberator.

The Battle of the Atlantic has yielded many fine stories of air attacks on underwater craft, but Flying Officer Trigg's exploit stands out as an epic of grim determination and high courage. His was the path of duty that leads to glory."

It was on the enemy's testimony that the award was given.

The U-boat sank, but the seven survivors were rescued by a Royal Navy vessel and the captain reported the incident, recommending Trigg be decorated for his bravery. The Victoria Cross was awarded posthumously

He was the only Allied serviceman in either World Wars 1 or 2 to be recommended for a Victoria Cross by the enemy.

In May 1998, Trigg's V.C. was sold at auction by Spinks of London for £120,000, the equal highest price ever realised for a V.C. The seller was not believed to have been a relative of Trigg, and the buyer was anonymous.

The medals awarded to Flying Officer Trigg are: 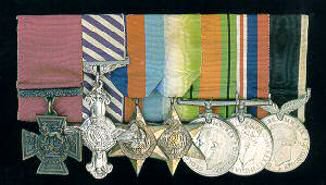