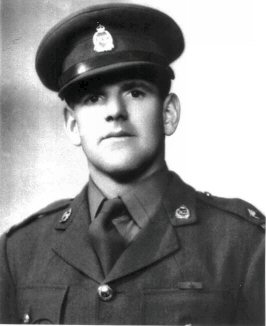 Sergeant Elliott was born at Apiti, New Zealand, on 25 April 1916, and was 26 years old when the action for which he was awarded The Victoria Cross took place.

The citation from the London Gazette dated 22 September 1942 reads:

"At Ruweisat at dawn on 15 July, 1942, the Battalion to which Sergeant Elliot belonged was attacked on three flanks by tanks. Under heavy tank, machine-gun and shell fire, Sergeant Elliott led the platoon he was commanding to the cover of a ridge 300 yards away, during which he sustained a chest wound.

His section then came under fire from a machine-gun post on his left flank. He immediately charged this post single-handed and succeeded in capturing it, killing several of the enemy and taking fifteen prisoners. During these two assaults he sustained three more wounds in the back and legs.

Although badly wounded in four places Sergeant Elliott refused to leave his men until he had reformed them, handed over his prisoners which were now increased to 130 and arranged for his men to rejoin their Battalion.

Owing to Sergeant Elliott's quick grasp of the situation, great personal courage and leadership, nineteen men, who were the only survivors of "B" Company of his Battalion captured and destroyed five machine-guns, one anti-tank gun, killed a great number of the enemy and captured 130 prisoners. Sergeant Elliott sustained only one casualty amongst his men and brought him back to the nearest advanced dressing station."

He later achieved the rank of Second Lieutenant. He died at Lower Hutt, New Zealand, on 2 October 1989 and is buried at the Returned Serviceman's Lawn Section of the Paraparaumu Cemetery, New Zealand.

The medals awarded to Sergeant Elliot are: