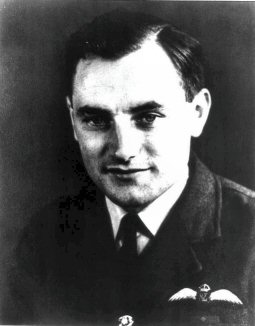 Sergeant Ward was born at Wellington, New Zealand, on 14 June 1919, and was 22 years old when the action for which he was awarded The Victoria Cross took place.

The citation from the London Gazette dated 5 August 1941 reads:

"On the night of 7th July, 1941, Sergeant Ward was second pilot of a Wellington returning from an attack on Munster.

When flying over the Zuider Zee at 13,000 feet, the aircraft was attacked from beneath by a Messerschmitt 110 which secured hits with cannon-shell and incendiary bullets. The rear gunner was wounded in the foot but delivered a burst of fire which sent the enemy fighter down, apparently out of control.

Fire then broke out near the starboard engine and, fed by petrol from a split pipe, quickly gained an alarming hold and threatened to spread to the entire wing. The crew forced a hole in the fuselage and made strenuous efforts to reduce the fire with extinguishers, and even the coffee in their vacuum flasks, but without success. They were then warned to be ready to abandon the aircraft.

As a last resort, Sergeant Ward volunteered to make an attempt to smother the fire with an engine cover which happened to be in use as a cushion. At first he proposed to discard his parachute, to reduce wind resistance, but was finally persuaded to take it. A rope from the dingy was tied to him, though this was of little help and might have become a danger had he been blown off the aircraft. With the help of the navigator, he then climbed through the narrow astro-hatch and put on his parachute. The bomber was flying at a reduced speed but the wind pressure must have been sufficient to render the operation one of extreme difficulty.

Breaking the fabric to make hand and foot holds where necessary, and also taking advantage of existing holes in the fabric, Sergeant Ward succeeded in descending three feet to the wing and proceeding another three feet to a position behind the engine, despite the slipstream from the airscrew, which nearly blew him off the wing. Lying in this precarious position, he smothered the fire in the wing fabric and tried to push the cover into the hole in the wing and on to the leaking pipe from which the fire came. As soon as he removed his hand, however, the terrific wind blew the cover out and when he tried again it was lost. Tired as he was, he was able with the navigator's assistance, to make successfully the perilous journey back into the aircraft.

There was now no danger of fire spreading from the petrol pipe, as there was no fabric left nearby, and in due course it burnt itself out. When the aircraft was nearly home some petrol which had collected in the wing blazed up furiously but died down quite suddenly. A safe landing was then made despite the damage sustained by the aircraft. The flight home had been made possible by the gallant action of Sergeant Ward in extinguishing the fire on the wing in circumstances of the greatest difficulty and at the risk of his life."

Sergeant Ward was killed in action over Hamburg, Germany, on 15 September 1941. He is buried at the Hamburg (Ohlsdorf) Cemetery, Germany.

The medals awarded to Sergeant Ward are: 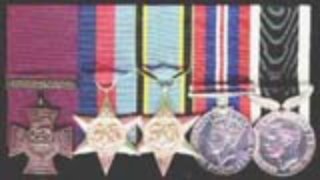