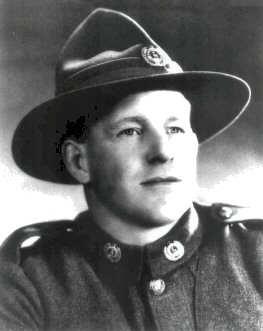 Sergeant Hulme was born at Dunedin, New Zealand, on 24 January 1911, and was 30 years old when the action for which he was awarded The Victoria Cross took place.

He stalked and killed 33 German snipers. Sergeant Hulme once disguised himself as a German paratrooper and killed a number of the enemy on the outskirts of Galatos.

The citation from the London Gazette dated 10 October 1941 reads:

"Serjeant Hulme exhibited most outstanding and inspiring qualities of leadership, initiative, skill, endurance, and most conspicuous gallantry and devotion to duty from the commencement of the heavy fighting in Crete on 20th May, 1941, until he was wounded in action 28th May, 1941. On ground overlooking Malene Aerodrome on 20th and 21st May he personally led parties of his men from the area held by the forward position and destroyed enemy organised parties who had established themselves out in front of our position, from which they brought heavy rifle, machine-gun and mortar fire to bear on our defensive posts. Numerous snipers in the area were dealt with by Serjeant Hulme personally; 130 dead were counted here. On 22nd, 23rd and 24th May, Serjeant Hulme was continuously going out alone or with one or two men and destroying enemy snipers. On 25th May, when Serjeant Hulme had rejoined his Battalion, this unit counter-attacked Galatos Village. The attack was partially held up by a large party of the enemy holding the school, from which they were inflicting heavy casualties on our troops. Serjeant Hulme went forward alone, threw grenades into the school and so disorganised the defence, that the counter-attack was able to proceed successfully.

On Tuesday, 27th May, when our troops were holding a defensive line in Suda Bay during the final retirement, five enemy snipers had worked into position on the hillside overlooking the flank of the Battalion line. Serjeant Hulme volunteered to deal with the situation, and stalked and killed the snipers in turn. He continued similar work successfully through the day.

On 28th May at Stylos, when an enemy heavy mortar was severely bombing a very important ridge held by the Battalion rearguard troops, inflicting severe casualties, Serjeant Hulme, on his own initiative, penetrated the enemy lines, killed the mortar crew of four, put the mortar out of action, and thus very materially assisted the withdrawal of the main body through Stylos. From the enemy mortar position he then worked to the left flank and killed three snipers who were causing concern to the rearguard. This made his score of enemy snipers 33 stalked and shot. Shortly afterwards Serjeant Hulme was severely wounded in the shoulder while stalking another sniper. When ordered to the rear, in spite of his wound, he directed traffic under fire and organised stragglers of various units into section groups."

Sergeant Hulme died at Te Puke on 2 September, 1982, and is buried at the Dudley Cemetery, Te Puke, New Zealand.

The medals awarded to Sergeant Hulme are: