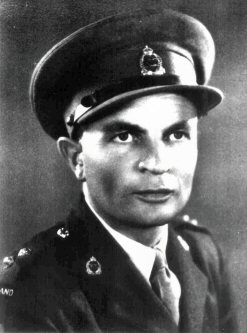 Charles Upham was born at Christchurch, New Zealand on September 21, 1908, and was 32 years old when the action for which he was awarded his first Victoria Cross took place.

He was educated at Christ's College, Canterbury and Canterbury Agricultural College where he earned a Diploma in Agriculture. He worked first as a sheep farmer, later as a manager, and then as a farm valuer for the government of New Zealand.

Following the outbreak of World War II, Upham immediately volunteered for service, citing his reason for doing so as the desire to fight for justice. He enlisted in the 2nd New Zealand Expeditionary Force in October 1939 and left for Egypt with the advance party of the 2nd NZEF in December 1939 as a sergeant in the 20th NZ Battalion. He was later commissioned as a Second Lieutenant in November 1940.

In March 1941 his battalion left for Greece and then withdrew to Crete, and it was here, as a Second Lieutenant, that he was wounded in the action in which he gained his first Victoria Cross.

The citation from the London Gazette dated 10 October 1941 reads:

"During the operations in Crete this officer performed a series of remarkable exploits, showing outstanding leadership, tactical skill and utter indifference to danger.

He commanded a forward platoon in the attack on Maleme on 22nd May and fought his way forward for over 3,000 yards unsupported by any other arms and against a defence strongly organised in depth. During this operation his platoon destroyed numerous enemy posts but on three occasions sections were temporarily held up.

In the first case, under a heavy fire from a machine gun nest he advanced to close quarters with pistol and grenades, so demoralising the occupants that his section was able to "mop up" with ease.

In the third case he crawled to within 15 yards of an M.G. post and killed the gunners with a grenade.

When his Company withdrew from Maleme he helped to carry a wounded man out under fire, and together with another officer rallied more men together to carry other wounded men out.

He was then sent to bring in a company which had become isolated. With a Corporal he went through enemy territory over 600 yards, killing two Germans on the way, found the company, and brought it back to the Battalion's new position. But for this action it would have been completely cut off.

During the following two days his platoon occupied an exposed position on forward slopes and was continuously under fire. Second Lieutenant Upham was blown over by one mortar shell, and painfully wounded by a piece of shrapnel behind the left shoulder, by another. He disregarded this wound and remained on duty. He also received a bullet in the foot which he later removed in Egypt.

At Galatos on 25th May his platoon was heavily engaged and came under severe mortar and machine-gun fire. While his platoon stopped under cover of a ridge Second-Lieutenant Upham went forward, observed the enemy and brought the platoon forward when the Germans advanced. They killed over 40 with fire and grenades and forced the remainder to fall back.

When his platoon was ordered to retire he sent it back under the platoon Serjeant and he went back to warn other troops that they were being cut off. When he came out himself he was fired on by two Germans. He fell and shammed dead, then crawled into a position and having the use of only one arm rested his rifle in the fork of a tree and as the Germans came forward he killed them both. The second to fall actually hit the muzzle of the rifle as he fell.

On 30th May at Sphakia his platoon was ordered to deal with a party of the enemy which had advanced down a ravine to near Force Headquarters. Though in an exhausted condition he climbed the steep hill to the west of the ravine, placed his men in positions on the slope overlooking the ravine and himself went to the top with a Bren Gun and two riflemen. By cleaver tactics he induced the enemy party to expose itself and then at a range of 500 yards shot 22 and caused the remainder to disperse in panic.

During the whole of the operations he suffered from dysentery and was able to eat very little, in addition to being wounded and bruised.

He showed superb coolness, great skill and dash and complete disregard of danger. His conduct and leadership inspired his whole platoon to fight magnificently throughout, and in fact was an inspiration to the Battalion."

Lieutenant Upham was evacuated to Egypt, now promoted to the rank of Captain. He received the bar for his actions on July 14 and 15, 1942, at Ruweisat Ridge.

The citation from the London Gazette dated 25 September 1945 reads:

"Captain C.H. Upham, V.C., was commanding a Company of New Zealand troops in the Western Desert during the operations which culminated in the attack on El Ruweisat Ridge on the night of 14th-15th July, 1942.

In spite of being wounded twice, once when crossing open ground swept by enemy fire to inspect his forward section guarding our mine-fields and again when he completely destroyed an entire truck load of German soldiers with hand grenades, Captain Upham insisted on remaining with his men to take part in the final assault.

During the opening stages of the attack on the ridge Captain Upham's Company formed part of the reserve battalion, but, when communications with the forward troops broke down and he was instructed to send up an officer to report progress of the attack, he went out himself armed with a Spandau gun and, after several sharp encounters with enemy machine gun posts, succeeded in bringing back the required information.

Just before dawn the reserve battalion was ordered forward, but, when it had almost reached its objective, very heavy fire was encountered from a strongly defended enemy locality, consisting of four machine gun posts and a number of tanks.

Captain Upham, without hesitation, at once led his Company in a determined attack on the two nearest strongpoints on the left flank of the sector. His voice could be heard above the din of battle cheering on his men and, in spite of the fierce resistance of the enemy and the heavy casualties on both sides, the objective was captured.

Captain Upham, during the engagement, himself destroyed a German tank and several guns and vehicles with grenades and although he was shot through the elbow by a machine gun bullet and had his arm broken, he went on again to a forward position and brought back some of his men who had become isolated. He continued to dominate the situation until his men had beaten off a violent enemy counter-attack and consolidated the vital position which they had won under his inspiring leadership.

Exhausted by pain from his wound and weak from loss of blood Captain Upham was then removed to the Regimental Aid Post but immediately his wound had been dressed he returned to his men, remaining with them all day long under heavy enemy artillery and mortar fire, until he was again severely wounded and being now unable to move, fell into the hands of the enemy when, his gallant Company having been reduced to only six survivors, his position was finally over-run by superior enemy forces, in spite of the outstanding gallantry and magnificent leadership shown by Captain Upham.

The Victoria Cross was conferred on Captain Upham for conspicuous bravery during the operations in Crete in May, 1941, and the award was announced in the London Gazette dated 14th October, 1941."

After being captured by the Germans, Captain Upham was sent to an Italian Hospital to recuperate. During captivity he attempted to escape numerous times before being branded "dangerous" by the Germans and incarcerated in the infamous prison fortress Colditz Castle on October 14, 1944.

When King George VI enquired to Major-General Kippenberger whether Upham deserved a Bar to the Cross, Kippenberger replied, "In my respectful opinion, sir, Upham has won the VC several times over."

Captain Upham is only the third person to receive The Victoria Cross twice and the only combat soldier to receive the award twice (the others were both Royal Army Medical Corps officers).

Charles Upham returned to New Zealand in September 1945 and ceased Expeditionary Force service in November 1945. Shortly after his return he married Molly McTamney.

Following the war Charles Upham took up the New Zealand government's scheme of offering ex-soldiers the chance of a farm of their own. He lived out the rest of his life in peace and solitude on his farm in Hunadlee, North Canterbury. It is said that for the remainder of his life, Upham would allow no German car onto his property.

A bronze statue of him now stands outside the Hurunui District Council buildings in Amberley, North Canterbury, depicting Charles Upham 'the observer'.

The medals awarded to Captain Upham are: 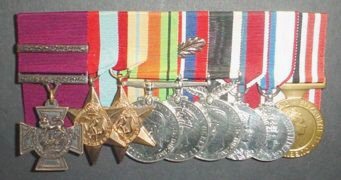