Obverse: A silver cross paty or formy (with straight edges) with a six-pointed gold star on each arm, and on a central disc within a wreath of gold New Zealand fern fronds the words "NEW ZEALAND". The cross is surmounted by a gold Royal Crown and attached by the letter "V" to the suspender bar.

Size: 45mm across the arms of the cross.

Ribbon: 38mm in width, of bright blue in colour, with a small silver representation of the Cross affixed to the centre when the ribbon alone is worn.

A recipient of an Award who performs a further act of bravery that is worthy of recognition by the same Award may be awarded a Bar to be attached to the ribbon of his or her Award. This Bar is of silver, oblong in shape, and bears two New Zealand fern fronds. When the ribbon alone is worn, for each Bar awarded an additional emblem is worn. Recipients of the Award shall have the privilege of placing the letters "N.Z.C." after their names.

There have been 4 awards of The New Zealand Cross up to the end of December 2021. 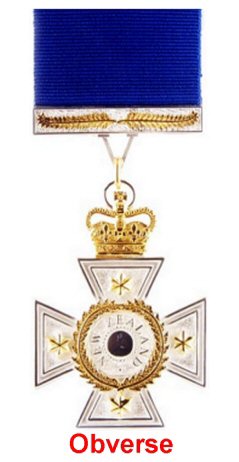