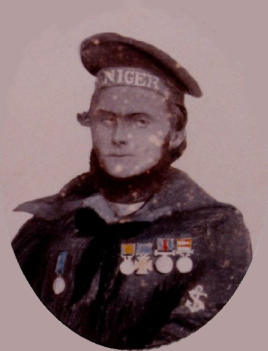 Leading Seaman Odgers was born at Falmouth, England, on 14 February 1834, and was 26 years old, and a Leading Seaman in the Royal Navy, during the Taranaki Maori War, New Zealand, when the action for which he was awarded The Victoria Cross took place.

"On the 28th of March, 1860, William Odgers displayed conspicuous gallantry at the Storming of a Pah during operations against Rebel Natives in New Zealand; having been the first to enter it under a heavy fire, and having assisted in hauling down the enemy's colours."

This was the first Victoria Cross won in New Zealand.

His Victoria Cross is held at the Sheesh Mahal Museum, Patiala, India.