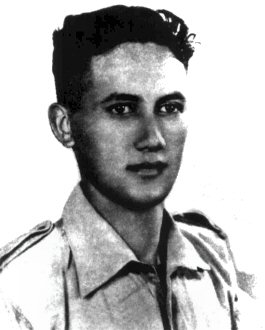 Second Lieutenant Ngarimu was born at Ruatoria, New Zealand, on 7 April 1918, and was 24 years old when the action for which he was awarded The Victoria Cross took place.

The citation from the London Gazette dated 1 June 1943 reads:

"During the action at the Tebaga Gap on the 26th March, 1943, Second-Lieutenant Ngarimu commanded a platoon in an attack upon the vital hill feature, Point 209. He was given the task of attacking and capturing an underfeature forward of Point 209 itself and held in considerable strength by the enemy. He led his men with great determination straight up the face of the hill, undeterred by the intense mortar and machine-gun fire, which caused considerable casualties. Displaying courage and leadership of the highest order he was himself first on the hill crest, personally annihilating at least two enemy machine-gun posts. In the face of such a determined attack the remainder of the enemy fled, but further advance was impossible as the reverse slope was swept by machine-gun fire from Point 209 itself.

Under cover of a most intense mortar barrage the enemy counter-attacked, and Second-Lieutenant Ngarimu ordered his men to stand up and engage the enemy man for man. This they did with such good effect that the attackers were virtually mown down, Second-Lieutenant Ngarimu personally killing several. He was twice wounded, once by rifle fire in the shoulder and later by shrapnel in the leg, and though urged by both his Company and Battalion commanders to go out, he refused to do so saying that he would stay a little while with his men. He stayed until he met his death the following morning.

Darkness found this Officer and his depleted platoon lying on the rocky face of the forward slope of the hill feature, with the enemy in a similar position on the reverse slope about twenty yards distant. Throughout the night the enemy repeatedly launched fierce attacks in an attempt to dislodge Second-Lieutenant Ngarimu and his men, but each counter-attack was beaten off entirely by Second-Lieutenant Ngarimu's inspired leadership. During one of these counter-attacks the enemy, by using hand grenades, succeeded in piercing a certain part of the line. Without hesitation this Officer rushed to the threatened area, and those of the enemy he did not kill he drove back with stones and with his tommy-gun.

During another determined counter-attack by the enemy, part of his line broke. Yelling orders and encouragement, he rallied his men and led them in a fierce onslaught back into their old positions. All through the night, between attacks, he and his men were heavily harassed by machine-gun and mortar fire, but Second-Lieutenant Ngarimu watched his line very carefully, cheering his men on and inspiring them by his gallant personal conduct. Morning found him still in possession of the hill feature, but only he and two unwounded other ranks remained. Reinforcements were sent up to him. In the morning the enemy again counter-attacked, and it was during this attack that Second-Lieutenant Ngarimu was killed. He was killed on his feet defiantly facing the enemy with his tommy-gun at his hip. As he fell, he came to rest almost on top of those of the enemy who had fallen, the number of whom testified to his outstanding courage and fortitude."

Lieutenant Ngarimu was killed in action at Tebaga Gap, Tunisia on 27 March 1943, and is buried at the Sfax War Cemetery, Tunisia.

His Victoria Cross is held at the Tairawhiti Museum, Gisborne, New Zealand.