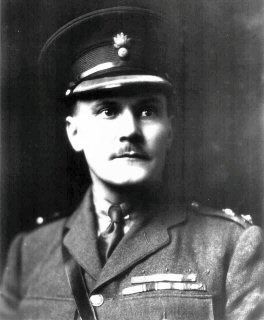 Captain Freyberg was born at Richmond, England, on 21 March 1889, and was 27 years old when the action for which he was awarded The Victoria Cross took place.

Although not a New Zealander by birth, and his Victoria Cross was won while he was serving with the British Army, Freyberg was raised in New Zealand, commanded the 2nd NZEF throughout the Second World War, and was later a Governor General of New Zealand.

Freyberg was born in Richmond upon Thames and moved to New Zealand with his parents when he was two years old. He attended Wellington College (New Zealand) from 1897 to 1904.

He left New Zealand in March 1914, and is known to have been in San Francisco and Mexico, where he may have been involved in the civil war then raging in that country. Upon hearing of the outbreak of World War I in Europe in August 1914, he travelled to England.

In 1914 Freyberg met and persuaded the then First Lord of the Admiralty, Winston Churchill, to give him a commission into the Hood Battalion of the infant Royal Naval Division.

During the initial landing at Battle of Gallipoli Freyberg swam from ship to ship lighting flares to distract the enemy, for this he received his first Distinguished Service Order.

He attained command of a brigade (in the 58th Division) in April 1917, reportedly making him the youngest General in the British Army.

On 13 November 1916 at Beaucourt sur Ancre, France, after carrying the initial attack through the enemy's front system of trenches, Lieutenant Colonel Freyberg's battalion was much disorganised, but after rallying and re-forming his own men and some others, he led them on a successful assault of the second objective, during which he was twice wounded, but remained in command and held his ground throughout the day and the following night. When reinforced the next morning he attacked and captured a strongly fortified village, taking 500 prisoners. He was wounded twice more, the second time severely, but he refused to leave the line until he had issued final instructions.

The citation from the London Gazette dated 15 December 1916 reads:

"For most conspicuous bravery and brilliant leading as a Battalion Commander.

By his splendid personal gallantry he carried the initial attack straight through the enemy's front system of trenches. Owing to mist and heavy fire of all descriptions, Lieutenant Colonel Freyberg's command was much disorganised after the capture of the first objective. He personally rallied and re-formed his men, including men from other units who had become intermixed.

He inspired all with his own contempt of danger. At the appointed time he led his men to the successful assault of the second objective, many prisoners being captured.

During this advance he was twice wounded. He again rallied and re-formed all who were with him, and although unsupported in a very advanced position, he held his ground for the remainder of the day, and throughout the night, under heavy artillery and machine gun fire. When reinforced on the following morning, he organised the attack on a strongly fortified village and showed a fine example of dash in personally leading the assault, capturing the village and five hundred prisoners. In this operation he was again wounded.

Later in the afternoon, he was again wounded severely, but refused to leave the line till he had issued final instructions.

The personality, valour and utter contempt of danger on the part of this single Officer enabled the lodgement in the most advanced objective of the Corps to be permanently held, and on this point d'appui the line was eventually formed."

Freyberg was classified as unfit for active service with the British Army in 1937. However following the outbreak of war in September 1939 he was placed back on the British Army active list. Following an approach from the New Zealand government, Freyberg offered his services and was subsequently appointed commander of the New Zealand 2nd Division and 2 NZEF.

In the chaos of the retreat from the Greek mainland campaign of 1941, Freyberg was given command of Allied forces during the Battle of Crete.

Freyberg continued to command the New Zealand 2nd Division through the North African and Italian campaigns of the British Eighth Army. He had become a popular commander with the New Zealand soldiers by the time he left his command in 1945 with the rank of Lieutenant General.

He was raised to the peerage as Baron Freyberg, of Wellington in New Zealand and of Munstead in the County of Surrey, in 1951.

On 1 March 1953 he was made the Deputy Constable and Lieutenant-Governor of Windsor Castle; he took up residence in the Norman Gateway the following year. He died at Windsor, Berkshire, England, on 4 July 1963, following the rupture of one of his war wounds, and was buried at the churchyard of St Martha on the Hill in Guildford.