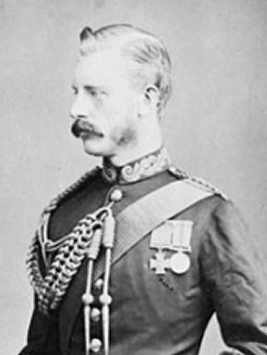 Lieutenant Pickard was born at Forest Hill, Northamptonshire, England, on 12 April 1844, and was 19 years old, and a Lieutenant in the Royal Regiment of Artillery, British Army, during the Waikato-Hauhau Maori War, New Zealand, when the action for which he was awarded The Victoria Cross took place.

"For gallant conduct during the assault on the enemy's position at Rangiriri, in New Zealand, on the 20th of November last, in exposing their lives to imminent danger, in crossing the entrance of the Maori keep, at a point upon which the enemy had concentrated their fire, with a view to render assistance to the wounded, and, more especially to the late Captain Mercer, of the Royal Artillery.

Lieutenant Pickard, it is stated, crossed, and re-crossed the parapet, to procure water for the wounded, when none of the men could be induced to perform this service, the space over which he traversed being exposed to a crossfire; and testimony is borne to the calmness displayed by him, and Assistant-Surgeon Temple, under the trying circumstances in which they were placed."

Lieutenant Pickard later achieved the rank of Colonel and was awarded the C.B.

His Victoria Cross is not publicly held. It was bought privately at auction on 1 August 2002 for the price of £56,630 and is held at the Lord Ashcroft Gallery, Imperial War Museum, London, England.