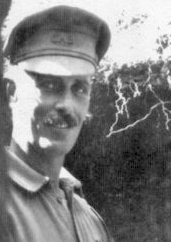 Captain Shout was born at Wellington, New Zealand, on 8 August 1882, and was 33 years old, and a Captain in the 1st Australian Infantry Battalion, Australian Imperial Force, during the First World War, when the action for which he was awarded The Victoria Cross took place.

He then moved to Australia and joined the Citizen Forces from 1907-1915 with the 29th Infantry Regiment (Australian Rifles) while working as a carpenter and joiner, and settled in Darlington, a Sydney suburb.

Following the outbreak of the First World War, the Australian government began raising the Australian Imperial Force and Shout volunteered on 27 August, 1914, being appointed to F Company of the 1st Battalion, Australian 1st Division, AIF.

Shout was promoted to Lieutenant on 1 February 1915, while the AIF was in training near Cairo, Egypt.

The Australian 1st Infantry Brigade, which contained the 1st Battalion, was the third brigade ashore at Anzac Cove on 25 April 1915 and Shout landed around 10 am. In the confusion of the landing, Shout found himself engaged in the desperate struggle for the dominating hill known as Baby 700. When the Turks eventually wrested control of the hill, the Anzac survivors, including Shout and Captain Leslie Morshead, who went on the command the Australian 9th Division during the Second World War, retreated to Russell's Top.

Two days later, by which time the brigades had untangled themselves and the 1st Battalion was now holding the southern flank near Gaba Tepe, Lieutenant Shout showed conspicuous courage in organizing and leading his men. While continually exposed to the enemy he planned and led a bayonet charge against the Turks. Then, with the position secured, Shout and a corporal left the trench, which was being continually swept with machine gun fire and went forward concealing themselves, and proceeded to fire on the Turks. In the words of Private Charles Huntley Thompson of the 13th Battalion, "That was the bravest thing I ever saw". During this action Shout carried more than a dozen men out of the firing line, despite being wounded himself. For this Shout was awarded the Military Cross and was Mentioned in Despatches.

On 11 May Shout was wounded in the side and had a bullet pass through his arm. He recovered from his wounds aboard the hospital ship Gascon before rejoining his unit on 26 May. On 29 July Shout was promoted to Captain and given a special Mention in Despatches by General Sir Ian Hamilton, commander of the Mediterranean Expeditionary Force

On 6 August the August Offensive commenced at Anzac with a diversionary assault on the Turkish trenches at Lone Pine by the 1st Division.

The night preceding the charge at Lone Pine, Shout spoke to the members of his platoon, telling Lance Corporal Alexander Ross McQueen, "We will make a name for Australia and ourselves tomorrow Mac". At midday on 6 August, Captain Shout issued his men with a white strip of calico to sew on the arms and back of their tunics. This was to indicate to the artillery the position of the Australian infantry during the attack.

The Australians attacked at 5.40 pm and captured Lone Pine within the hour. The Turks immediately began counter-attacking and the struggle continued for five days. On the morning of 9 August, the 1st Battalion relieved the 7th Battalion at a section known as Sasse's Sap. Captain Cecil Duncan Sasse DSO and bar, of the 4th Battalion had cleared the area of enemy troops but the Turks had reoccupied a large area of the captured trench.

Shout and Sasse enlisted the aid of eight volunteers, and following Sasse's plan of attack that had previously been successful, they charged down the trench with Shout bombing and Sasse shooting. The eight volunteers then built a barricade as each section of trench was secured. All went well and Shout, who was reported to be enjoying the fight, was preparing for the final dash of the day to capture just one more section of the trench.

Having lit three bombs, he set off down the trench hurling two before the third went off prematurely blowing Shout's hand off and severely injuring his face and body. Shout continued to direct this attack, murmuring "Good old First Brigade, well done!", before he lost consciousness through loss of blood. He died from his wounds at sea on board the hospital ship Neuralia on 11 August, 1915.

"For most conspicuous bravery at Lone Pine Trenches, in the Gallipoli Peninsula.

On the morning of the 9th August, 1915, with a very small party, Captain Shout charged down trenches strongly occupied by the enemy, and personally threw four bombs among them, killing eight and routing the remainder.

In the afternoon of the same day, from the position gained in the morning, he captured a further length of trench under similar conditions, and continued personally to bomb the enemy at close range under very heavy fire until he was severely wounded, losing his right hand and left eye.

This most gallant officer has since succumbed to his injuries."