Obverse: The Royal Cypher in gilt within a silver oval loop of rope tied at the base in a sailor's knot, the whole surmounted by a Royal Crown in gilt.

Ribbon: 38mm wide, the ribbon is green, edged in white.

Suspension: The ribbon is threaded through a 12mm diameter ring, which passes through a loop fixed to the top back of the crown. The ring will move forwards and backwards.

On 6th May, 1985, Queen Elizabeth II approved the creation of this new long service and good conduct award for officers of the Royal New Zealand Naval Reserve who had completed fifteen years' service. The award was backdated to 1st December, 1977. Clasps may be awarded upon completion of a further ten years' service. Clasps are in guilt and oblong in shape and bear the Royal Cypher.

Prior to 1985, members of the Royal New Zealand Naval Reserve were awarded The Royal Naval and Royal Marine Reserve Decoration. 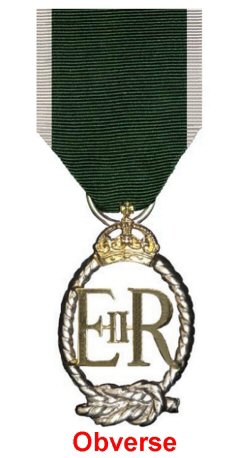