Obverse: A Maltese cross, the arms of which are joined to a circle at their inner end. Within the circle is an effigy of the head of the Sovereign. On the four arms of the cross, which are of red enamel, are the words "FAITH", "HOPE", "CHARITY" and the date "1883".

Reverse: Plain, but since 1938 the year of award has been recorded on the reverse side of the lower arm.

Size: 38mm across the arms of the cross.

Ribbon: 28mm wide, the ribbon is dark blue with 7mm wide red stripes at each edge.

Suspension: By means of an eyelet attached to the upper arm of the cross and to a brooch. A bow shaped ribbon covers the brooch. If a second award bar is worn, this is fixed between the eyelet and the ribbon.

The award is made to trained nurses who have shown special devotion in nursing the sick and wounded of the military forces, or who have performed some exceptional act of bravery at their post of duty. The Crosses are issued unnamed. There is provision for the grant of a second award bar to the Cross.

New Zealanders have been awarded thirty four Royal Red Crosses and one bar, of which one was awarded during the Boer War, fifteen and one bar during the First World War, nine during the Second World War and one between 1945 and 1990. 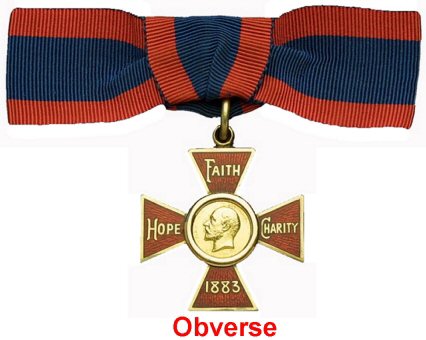