Obverse: A silver eight-pointed star of equal points with, in the centre, a Royal Crown within a wreath of New Zealand fern fronds, both gilt.

Size: 40mm across the points of the star.

Ribbon: 32mm in width, of crimson with white, purple, and white stripes in the centre.

Instituted on 20th September 1999, The New Zealand Gallantry Star replaces, and takes precedence over, several British decorations, these being The Distinguished Service Order, The Distinguished Conduct Medal and The Conspicuous Gallantry Medal. The New Zealand Gallantry Star is awarded for acts of outstanding gallantry in situations of danger. Its design is based on the shape of the proposed Gallipoli Star 1915, which was later abandoned.

A recipient of an Award who performs a further act of gallantry that is worthy of recognition by the same Award may be awarded a Bar to be attached to the ribbon of his or her Award. This Bar is of silver, oblong in shape, and bears two New Zealand fern fronds. When the ribbon alone is worn, for each Bar awarded, a small silver representation of an uncoiled fern frond is worn on the ribbon. Recipients of the Award shall have the privilege of placing the letters "N.Z.G.S." after their names.

There have been five awards of The New Zealand Gallantry Star up to the end of 2021. 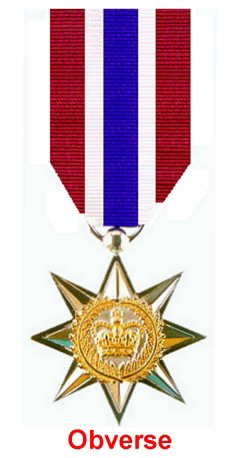