Obverse: The star has three points; the topmost is replaced by a crown. Across the face are two crossed swords, the points and handles of which protrude and thus form what might be considered four additional points of the star. In the centre, on a scroll, is the dates "1914-15". This scroll is surrounded by a laurel wreath 18mm in diameter, on the bottom of which is superscribed "V" inside the letter "G".

Reverse: Perfectly flat and plain, except for the stamping of the recipient's number, rank, name and regiment.

Ribbon: 31mm wide. Reading from left to right as seen on the wearer, the colours are red, white and blue, shaded and watered.

Suspension: The star has three points; the topmost is replaced by a crown, at the top of which is a 13mm diameter ring for suspension stamped out solid with the piece. Another ring passes through this and the ribbon is threaded through this second ring.

This bronze star was awarded to all who saw service in any theatre of war against the Central Powers between 15th August, 1914, and 31st December, 1915, except those eligible for The 1914 Star. It was not awarded to those who passed through a theatre of war, or only visited one. Those who passed through any of the theatres as passengers, or visited them for inspections, did not qualify. 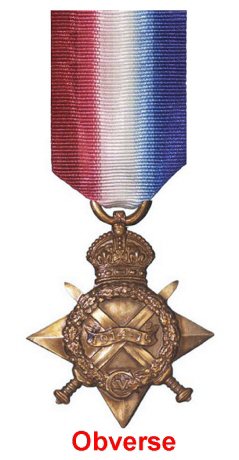